Menu
Search
Menu
Search
If you are new to smartwatches and want to get your first one, here are some great and affordable choices to start your journey.

After years of wearing a watch, it really becomes a habit. These days, when I want to find out what time it is, I no longer head to my smartphone. Rather, I rotate my wrist and look for the time on my watch.

I expect that many watch-wearing folk are like this. Smartwatches are even better than a regular digital or analog watch in this regard because they bring greater functionality onto your wrist.

The only downside I can think of with getting a smartwatch, as compared to a traditional watch, is the battery life and waterproofing. Not all smartwatches can be taken for a swim.

Otherwise, I’d choose a smartwatch any day. Not only can it tell time, it’ll bring phone notifications right to your wrist as well as other functionality.

So here’s the framework to decide what is the best budget smartwatch. First of all, it must be budget friendly to allow folks to dip their toes in the smartwatch world and it should ideally have all the features of a traditional watch as well as a decent battery life.

If you are new to smartwatches, you should know that the first three watches mentioned above all use Google’s Wear OS smartwatch operating system.

The Wear OS is one of my favourite smartwatch OSes. Granted, I find the Wear OS design to be ugly, but its features are just amazing and you are more likely than not going to be using this operating system on budget smartwatches.

What I love about the Wear OS is that it has some of the best features from Google.

Note that you can’t reply to messages or emails if you are paired to an iPhone.

Google Assistant is powerful. From doing calculations to setting appointments to searching the web, it can do a lot more than most other voice assistants. You can’t find a better voice assistant in a budget smartwatch. That I can guarantee unless Apple Watches suddenly plummet in price in the same way the stock market did in March 2020.

The Wear OS also has a massive app store where you’d find apps that enhance the capabilities of the smartwatch. And given that you’re using a Google watch, you also get Google apps on your smartwatch including Maps, Keep and Translate.

Google Maps is particularly useful when biking because you can get directions on your wrist. Translate is great if you are in a foreign country and want to get things translated directly on your wrist (rather than holding a brick of a cellphone).

All Wear OS smartwatches also come with Google Fit which is a health and workout tracker. It tracks steps, intensity of workouts and also has a breathing timer. The one thing that’s lacking from Google Fit is the ability to track swimming.

Pay more money and you generally get better hardware. For example, you might get 1GB of RAM compared to 512MB which is standard across all Wear OS watches named in this review.

You also get a speaker which opens up the Phone app.

I really like being able to answer calls on my wrist. It makes me look like a quirky technophile as well as… sometimes I really don’t want to carry my brick of a phone (Samsung Note 9 with the most robust Otter case). Getting fatter every year also makes it hard to take the massive phone out of my pocket.

The speaker also allows you to hear responses from Google Assistant.

On to the reviews, then!

The Fossil Sport Smartwatch is the ultimate budget smartwatch out there. It regularly goes on sale and the watch is so cheap yet so feature-rich.

It’s a really lightweight watch not far off from a digital watch from the 90s but it can do much more than an antiquated digital watch.

I really like the design and I like how the Fossil Sport Smartwatch really feels like an “out of mind” smartwatch. It’s there when you want to know what time it is or when you receive a notification but otherwise you don’t really feel its presence.

One big complaint I have with modern smartwatches is that they are generally very noticeable. The Ticwatch E2 and S2 that I have mentioned above fall into this category. They’re really, really big and I can feel them being strapped onto my wrist.

The Fossil Sport Smartwatch is water resistant enough for you to take it swimming. It also has NFC for contactless payments through Google Pay, something that the Ticwatch E2 and S2 do not have.

Plus, it has a crown that is really useful for navigation. All the other watches mentioned do not have a crown and so you’re swiping all the way to navigate. Not ideal but not a dealbreaker.

But here’s the biggest downside of the Fossil Sport Smartwatch — its battery life is truly atrocious.

This is based on my expectations that a smartwatch should be able to last through a full day. The Fossil Sport struggles to achieve this with the always-on screen turned on and with the heart rate sensor activated.

If you are taking the watch out to track your exercise, then be prepared to have no juice left, especially if you use its internal GPS.

If you run out of battery, the watch will go into power saving mode, which pushes the Fossil Sport Smartwatch back to the ‘90s, when watches could only tell time and date.

OK, not really. Watches from the ‘90s also had a stopwatch and alarm feature. So power saving mode makes it even less useful than a traditional digital watch.

If you are happy to use this watch frugally by turning off some features, then you’ll do well with the Fossil Sport Smartwatch. Otherwise, it’s time to consider the other watches.

The Ticwatch E2, Ticwatch S2 and Fitbit Versa 2 do not have these problems. And that’s why they’re worth a consideration.

The only difference between the Ticwatch E2 and S2 is that the Ticwatch S2 has a MIL-STD-810G rating. This means it has been tested to withstand certain less-than-usual conditions. It’s a more rugged, durable watch as a result.

If you feel this gives you an extra layer of piece of mind, then paying the extra bucks to get it is worth it.

But to the lay user, it’s probably like one of those pickup trucks that advertise themselves as using “military-grade aluminum” — that is to say, meaningless marketing drivel meant to appeal to fully-bearded masculinity.

And so, that’s why, if you don’t care for it, you can always go for the basic Ticwatch E2. The Ticwatch E2 looks pretty solid. It has a recessed display and a thick bezel which keeps the screen from direct contact against a hard surface. This is the same with the Ticwatch S2.

You get all the goodness of the Wear OS, and as compared to the Fossil Sport Smartwatch, you get much, much better battery life. It’ll take you through a full day, and then maybe half of the second day.

You could use its internal GPS and you won’t see the watch shut down into power saving mode.

Mobvoi, the makers of the Ticwatches, also include their TicHealth/TicPulse/TicExercise suite. They had many advantages such as having a step counter before Google Fit updated itself with that feature. Currently, the gap between Google Fit and Mobvoi’s suite has shrunk.

But TicExercise has one major plus — its Pool Swim app. This means that all Ticwatches can record swims without requiring you to download a third-party app. That is a great convenience.

Unlike the Fossil Sport Smartwatch, these two watches do not have an NFC chip so you can’t use Google Pay.

The Fitbit Versa 2 is a great watch that is the least budget-friendly among all these watches. However, it’s worth some consideration given that it is a good alternative to the Wear OS watches.

The big plus with the Versa 2 is that it gives you access to Fitbit’s great app.

The watch has a deep fitness and exercise focus and I really liked how it could help you improve your lifestyle and exercise without breaking the bank like the Polar Vantage V or Garmin Fenix 6 would.

Although to be fair, those aforementioned smartwatches are really specialized and they are miles ahead of  the Fitbit Versa 2 in their domain of specialization. 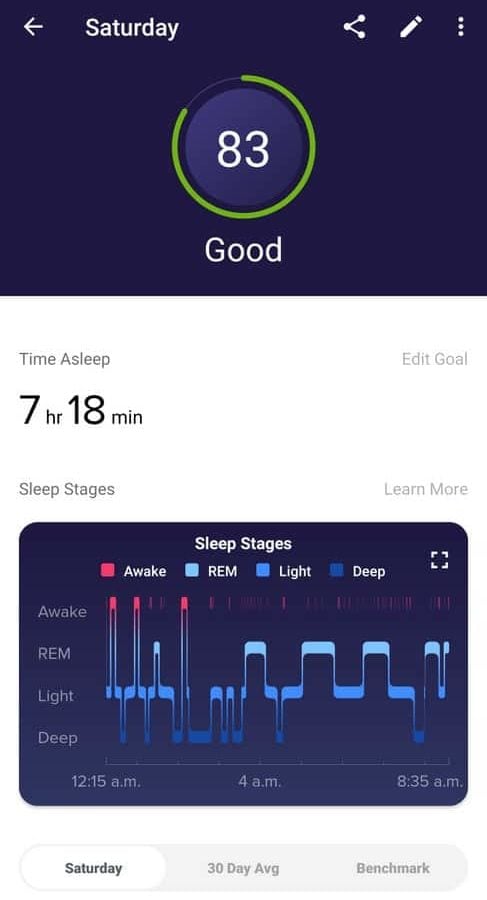 The Fitbit Versa 2’s app is great. It tracks sleep, which no Wear OS watch does by default. It also has a calorie counter where you can search a database of local products to make it easier for you to track your calorie count. The exercise analysis is also better as it tells you which zones you are working out in.

Finally, the app also gives you access to certain exercise programs, although most of them are paywalled and you can’t get to them unless you get Fitbit Premium.

Although I can honestly say any mass-market smartwatch really looks better than the Wear OS. The Wear OS is very utilitarian but looks unattractive.

The battery life of the Versa 2 is also the best among all the above smartwatches. It lasts two full days but if you use it conservatively, you could go for longer.

How does it do it? For one, this watch does not have an internal GPS, which actually can make this watch a lot less attractive than the Ticwatch E2 and S2.

I like going on the water and sometimes I don’t bring my phone along. I keep it in the car. So it’d be a pity if I couldn’t see my route because I didn’t bring my smartphone to supply GPS location data. It wasn’t a big deal until I became a fan of watersports.

Also, the Fitbit Versa 2 has Alexa which is good but not as good as Google Assistant. Replying to messages is OK but if you want something really contextualized and technical, you will do just a bit better with Google’s speech-to-text system.

So, which is the best?

The Ticwatch E2 is the best.

All things considered, the Ticwatch E2 offers the best value and has many features that beats out the rest.

I can’t take it when the smartphone goes into limping mode. “Get me back to a charging station,” seems to be its daily cri de coeur as it goes into power saving mode.

The Fitbit Versa 2 is a great watch although its price really puts it on the edge of a “budget” product. Its features are more specialized but it also is worse than any Wear OS watch at certain daily tasks.