In life, you can’t have everything and when it comes to smartwatches, it becomes most obvious once you’ve used the Garmin Fenix 6 and the Apple Watch Series 5.

I really like the Garmin Fenix 6 and I also really like the Apple Watch Series 5. They are both excellent in their own domains but unlike me, most folks will only ever own one smartwatch and I’m going to walk you through why you should get one over the other.

Before I go any further, let me just preface that I will be writing this comparison with both watches paired to an iPhone, since the Apple Watch Series 5 only works with iPhones and chances are most people reading this are iPhone users.

I realized that most people want a smartwatch for timekeeping as well as receiving emails and text on their wrist. To that end, both watches will be able to tell you the time in digital as well as analog format.

The Apple Watch Series 5’s sharp and bright OLED screen and its new always-on screen will delight your eyes in all conditions. Whereas the Fenix 6’s transreflective LCD is excellent too as it uses ambient light to illuminate the screen which means that you only need to use its backlight whenever it gets too dark.

New to the Series 5 is the always-on screen, which is something that is so typical among smartwatches, it was amusing to me that it was considered “new feature.” Nevertheless, having an always-on screen is amazing because you won’t have to rotate your wrist to see your time.

The Fenix 6’s screen is always on by default, and because of its power-saving LCD, it doesn’t drain battery as severely. 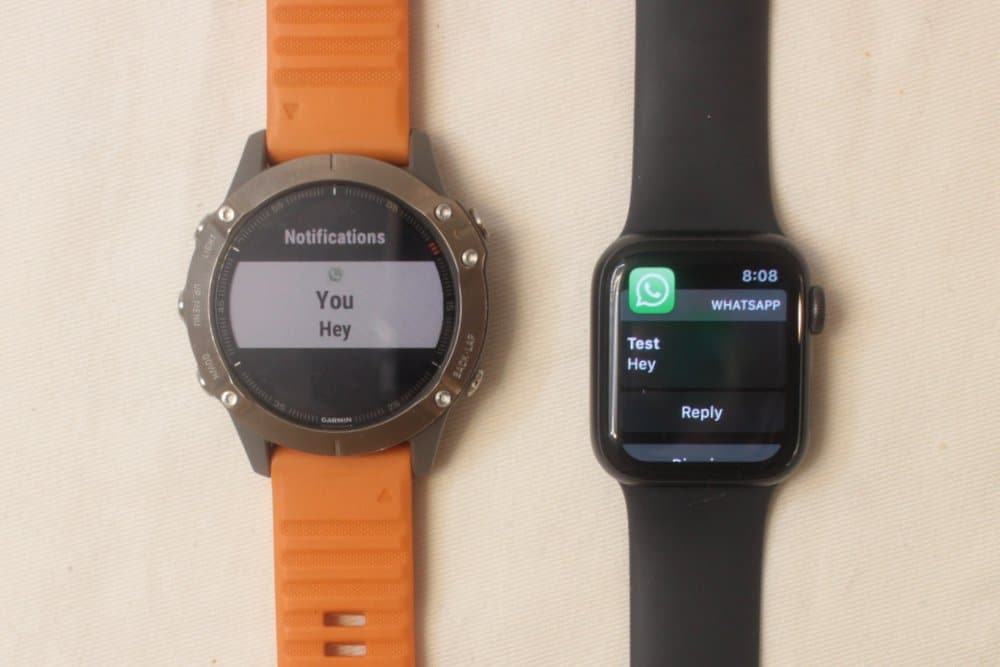 The big difference appears when you want to interact with your message or email notification.

This contrasts with the Garmin Fenix 6 which has absolutely no access to your email, phone or texts except in the form of read-only notifications. This is typical among all non-Apple watches when paired with an Apple iPhone, so it’s not Garmin’s fault here.

That really makes the Apple Watch a significantly more useful smartwatch than anything else.

I really like the features of the Garmin Fenix 6, and the more you wear the Fenix 6, the better it performs. The problem with that is the watch is quite heavy and the strap is uncomfortable. I find myself taking the watch off a few times a day so that my arm can have a breather, and every time I take it off, I will see an imprint of the strap and the rear of the watch case on my skin.

The number of apps within an app store is largely related to how large its user base is. This means that the Apple Watch has superior numbers of apps while the Garmin has fewer apps to download.

One of the most useful pre-loaded apps available on the Pro or Sapphire versions of the Garmin Fenix 6 is the maps function, which does not require a data connection or a smartphone to be nearby. This is really great when you are navigating new routes on a bicycle, for example.

On the Apple Watch, you can download Apple Maps and do the same task, except you’ll need your phone near you. More annoyingly, the watch will go into power saving mode, meaning you won’t be able to see your map. Compared to the Fenix 6, it wasn’t as good when using it during an activity, but it’s free unlike the Fenix 6’s maps.

The Apple Watch also comes with some very interesting apps including a language translation app as well as a noise meter that will notify you if you were ever in an environment where your hearing could be damaged.

The Fenix 6 has no voice assistant whereas the Apple Watch has Siri, which has proven to be an excellent voice assistant in various tasks from scheduling appointments to finding navigational routes.

This is where the tables get turned. The Garmin Fenix 6 is a class-leading workout tracker which hasn’t been beaten in all the tests I’ve made.

The Fenix 6 just has so many fantastic workout, lifestyle and health tracking options that it’s hard for a general-purpose watch to beat. I’d pay the premium commanded by the Fenix 6 if I ever wanted something that will greatly improve my health and performance.

Both watches can be used in a swimming pool and have an integrated GPS for cellphone-free activity tracking.

You can choose from 60 workouts from running all the way to Tai Chi on the Apple Watch. The Fenix 6 has 40 options but all the important sports are covered.

Both watches also give you badges when you achieve a goal, as a means of encouraging you to exercise more, and you can connect with your friends who have similar smartwatches to compete with them.

Where the Fenix 6 beats the Apple Watch is in its ability to analyze data and create training plans. After each workout, both watches will graph out data such as your heart rate, elevation and speed, but the Fenix 6 goes further by telling you whether your exercise has helped you aerobically or anaerobically.

Runners will enjoy the Fenix 6 even further because the watch has the ability to measure your VO2Max and create training plans for your next race. It’s also compatible with Bluetooth and ANT+ accessories.

It took about nine days to get the Fenix 6 from full to 24%. Whereas it only took 36 hours for the Apple Watch to go from full to empty.

Why is this a “workout” consideration? Because Garmin has positioned the Fenix 6 as an expedition watch. Indeed, because of its long battery life, you can take it out for your multi-day kayaking trip, skiing trip or bike touring trip.

A fuller picture of your health

The Fenix 6 has some special features that help you get a better outlook of your health. Let’s talk about sleep — a state that you will be in for about a third of your life. The Apple Watch does not have a sleep tracker by default, but not only does the Fenix 6 track your sleep, it can also tell you about your stress levels, acclimatization and finally uses different metrics to give you your Body Battery figure.

This impasse is severe.

If I could only have one, then I would strongly opt for the Apple Watch Series 5. It’s an excellent all-purpose watch that is comfortable, light and fun to use. Being able to do tasks on my wrist is a great convenience.

If I were trying to improve my health and sporting ability, then there’s nothing better than the Garmin Fenix 6. The data that it analyzes will give you a much better insight into your lifestyle, health and training.