But the reasons why I like these two watches are different. Beyond being a timepiece, both watches are best enjoyed for their specific purposes.

If modern smartphones are indicators of what people perceive as modern and stylish, then I conclude that people desire curved edges, thin bezels and a thin watch case. In this case, the Fitbit Versa 2 wins hands out.

The Versa 2 is the lightest, thinnest and has a look that parallels that of Samsung and Apple’s high-end devices. It also only has one button which makes it very iPhone-like.

The Galaxy Watch Active 2 is next. It is a bit thicker but otherwise has an aesthetically pleasing circular watch case with curved edges. It really is the most modern-looking watch in Samsung’s lineup.

The Galaxy Watch looks rugged because of its stainless steel watch case and textured buttons. Its recessed screen also looks like it’ll be better protected. The rugged look comes at a cost of looking modern and stylish though. In my opinion, it’s the most functional watch among the three but is also the least aesthetically pleasing.

One caveat: the number of carriers supported is limited, so before you buy the LTE version, check this page for https://www.samsung.com/global/galaxy/galaxy-watch/carrier/ support.

Most premium watches come with a physical dial that you can use to navigate screens such as a crown or a rotating bezel as is the case on the Samsung Galaxy Watch. I really like the bezel because it gives you a tactile way to navigate between screens.

The Samsung Galaxy Watch Active 2 has a virtual bezel where if you run your finger around the circumference of the watch, you can navigate between screens.

The Fitbit Versa 2 has none of these. But I like the Fitbit the most. Why?

Because it’s the simplest of them all. You can get everything done with the touchscreen and with the single button. This comes from having a simple menu and a smooth interaction flow. I love it. 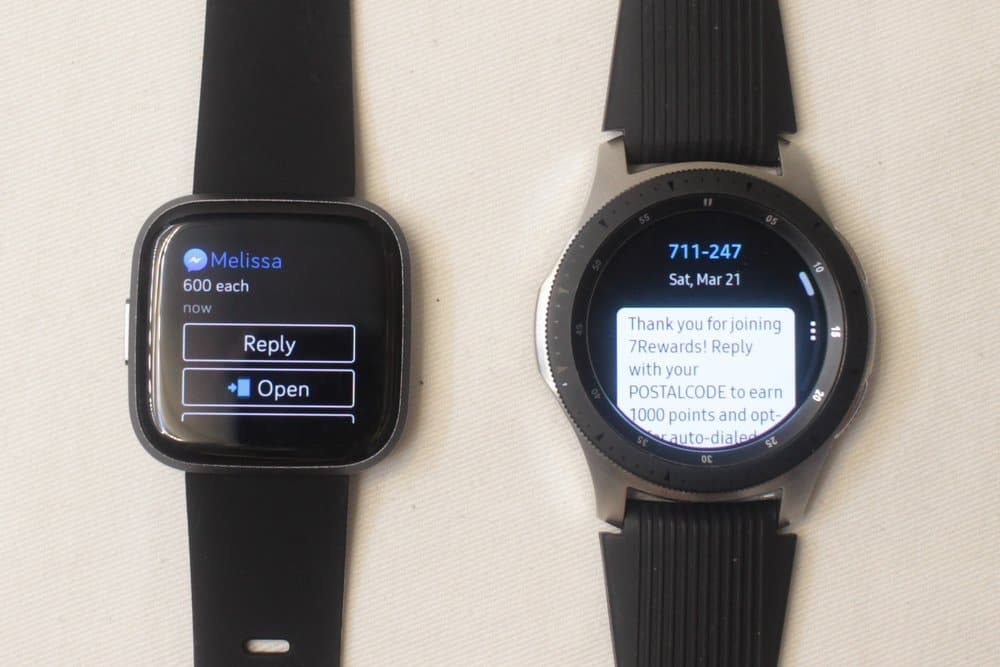 This is where the Fitbit Versa 2 shows its weakness. The Versa 2 occupies a space between a fitness tracker and general purpose smartwatch which also makes it a bit of a master of none.

In terms of emails and text, you can receive them as notifications on the Versa 2 but unlike the Samsung watches, you can’t access them through apps and see a list of emails and text as you would on your phone.

To be fair, you only get this seamless access with the Samsung watches if you are paired with a Samsung phone.

And you won’t be able to reply to messages or emails if you are paired to an iPhone.

Both the Fitbit and the Samsung watches offer the ability to reply to messages but with the Fitbit, you can only use its Alexa speech-to-text system to compose your replies.

On the Samsung watches, you can use its Bixby speech-to-text system, hand write characters or use its keyboard.

Let’s compare the speech-to-text systems first. Alexa beats Bixby outright. I am starting to believe that the more data these systems can collect, the better it gets at interpreting what you are trying to say.

Alexa results in less frustration when you are replying to text. But since it’s the ONLY way of inputting text into the Fitbit, you are quite constrained if you have something that Alexa won’t transcribe.

The Samsung smartwatches are therefore more dynamic in this regard even though its weak speech-to-text system takes major points off of it.

Both watches come with a bunch of useful apps like timers, weather and music apps. Spotify is available on both systems, but the Fitbit Versa 2 requires you to have a Pro subscription.

Both app stores have a limited number of useful apps, especially when compared to the Google Wear OS and Apple’s WatchOS app stores. I attribute the reason for this being the low number of users on the Fitbit and Samsung platforms.

I am thoroughly impressed with both Samsung and Fitbit’s health and wellness apps.

Both apps are very similar in the features they offer. Some parallels include a nutrition logger, a sleep tracker and an exercise tracker.

Both platforms allow you to easily track your nutrition as they have a database of food that you can easily add to the list. I liked how you could find local store brand items and have all their nutritional info added to your list.

As for exercises, Fitbit has 20 workouts you can track while Samsung has about 40. The number of exercises only matter if you are doing a sport that is less common. If you just enjoy running, swimming or biking, all smartwatches will support that.

I’m happy to say both watches track exercises reliably. You get heart rate, location and other data depending on your workout. Except — and this is a big point — with the Fitbit, you must bring your phone with you in order to get location data as the Versa 2 does not have an integrated GPS.

Both apps are also neck-and-neck in terms of functionality. I personally find the data visualization on the Fitbit to be superior because of its prettier colours.

On both apps, you will find a social network and some fitness-related activities that you can partake in. The social network features of the Fitbit app is superior because you can join different groups based on interest and post your progress and comments on other people’s posts. There’s a lot of positivity in that area.

Fitbit does have a Premium function that requires you to pay to get access to some programs and statistics, though, whereas Samsung Health uses banner advertising on its apps.

Both watches are very good in this area, with the Fitbit being slightly purposed towards fitness.

You can’t go wrong with both watches, but if you want a simpler watch that is focused towards fitness, then you will do well with the Fitbit Versa 2. It’s a lightweight smartwatch with good functionality.

If you want a smartwatch that is far more dynamic than the Fitbit, then the Samsung Galaxy/Active 2 will do you well. This is particularly true if you pair the Galaxys to a Samsung smartphone.