Menu
Search
Menu
Search
The Ticwatch S2 and Garmin Fenix 6 offer fantastic features for the sports enthusiast, but only one watch is good for everyday use. The other is just OK...

Mobvoi’s Ticwatch S2 and the Garmin Fenix 6 are both marketed as watches for sportspeople.

So if they have the same audience why is it that the Garmin Fenix 6 costs multiple times the Ticwatch S2?

Well, for one, these two watches are really meant for very different consumers. Beyond the sports-oriented sheen that the Ticwatch S2 puts up, it really is a general-purpose smartwatch.

You could take the Ticwatch S2 out to do hardcore sports, but it just won’t do as well as the Garmin Fenix 6.

At the same time, you can try to use the Garmin Fenix 6 as an everyday watch, and it won’t be as convenient as using the Ticwatch S2. In the smartwatch world, more money doesn’t always guarantee superiority in all aspects of functionality!

The Ticwatch S2 is a fantastic watch because it comes with Google’s Wear OS.

The Wear OS is a great platform for smartwatches because it has a huge app store, it has great integration with Android phones and it has Google Assistant.

The Garmin Fenix 6 comes with its own proprietary OS. When manufacturers decided to make their own OS, they usually forgo everyday utility for some specialized features — this is true in Fitbit, Polar and Garmin’s case.

The Garmin Fenix 6 is superior because it has some really excellent health and sports functionality. 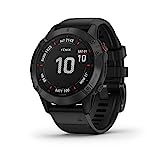 Both platforms will receive messages and emails that you get on your phone.

Assuming you are paired to an Android smartphone, you can also reply.

Replying in the Garmin Fenix 6 is much more limited to pre-composed messages that you can customize. You can’t input custom messages like you would on the Ticwatch S2.

The Ticwatch S2 has a microphone and that opens up many possibilities, one of which includes the speech-to-text functionality.

Being able to speak into my smartwatch and get a message through is the ultimate convenience offered by a smartwatch. You could also use a 26-alphabet keyboard or hand write letters.

The transcription is also very reliable and that’s great for convenience’s sake.

Wear OS watches come with Google Assistant which is another big plus in the Ticwatch S2’s favour.

The Garmin Fenix 6 has no microphone. So no luck at all with a voice assistant.

Having a voice assistant is very convenient, especially a top-grade one like Google Assistant. There’s just so much you can do on it — check the weather, ask for directions and starting a timer.

The Garmin Connect IQ store has many watch faces but of the few apps that are available on that app store, nothing left an impression on me.

Whereas when it comes to the Google Play Store, you get a huge app selection. This includes apps such as Google Maps, Keep and Translate.

The higher-end models of the Garmin Fenix 6 do have an integrated map and compared to Google Maps, the Fenix 6 is really, really good. For one, the maps are offline maps, meaning that you won’t need your cellphone around for a data connection like you would using Google Maps on the Ticwatch S2.

Just remember that Garmin’s maps comes with an added cost while Google Maps is free. And because you can customize the Ticwatch S2 with a myriad of apps, it’s a much more dynamic watch, whereas the Garmin Fenix 6 is much more constrained in adding features via apps.

The battery life of the Garmin Fenix 6 is superior in relation to the Ticwatch S2.

The Fenix 6 uses a power-saving display that uses ambient light to illuminate its display, so unlike the Ticwatch S2’s LED screen, it can last for many, many days.

The Ticwatch S2 lasts for two days while I only needed to charge the Fenix 6 once a week when I was wearing it 24/7. That said, I didn’t track any exercise or used its navigation function during that time.

If you are going to do an expedition, the Fenix 6 will be much more reliable. You could even buy the Fenix 6 with an integrated solar charger.

The TIcwatch S2 and Garmin Fenix 6 have great hardware suitable for many sports.

Both have an integrated GPS, can be brought into water and are durable. In fact, the Ticwatch S2 has a US Military Standard 810G durability rating, which means the S2 is operational between -20ºC to 55ºC; resistant to humidity, dust, and salt fog.

Both watches are suitable for swimming and other shallow water sports. Both watches also have an integrated GPS which is truly fantastic if you want to ditch the smartphone at home.

But the Fenix 6 is definitely superior to the Ticwatch S2. It was made for sports enthusiasts specifically.

Both watches have the ability to track workouts like swimming, running and cycling. The data both watches present to you is also very similar.

But with the Fenix 6, you pay for an extra layer of deep analysis not offered by the Ticwatch S2. For example, the Connect smartphone app tells you more about your exercise’s quality. It can tell you whether your training is tough enough, whether you’re working enough in aerobic and anaerobic zones, and whether your workout was long enough.

In fact, the Fenix 6 has specific features for runners to benefit from. You can create a race training training plan on the Connect app, and you can measure your VO2Max using the watch.

The Ticwatch S2 does not have any sleep tracking functionality with its pre-installed suite of apps.

Whereas the Garmin Fenix 6 is a powerhouse of health metrics number crunching. Not only can it do sleep tracking, whereby it breaks your sleep into different zones, it can also analyze your stress levels and come up with a Body Battery number. These metrics give you an idea of whether you should rest more or whether you still have the juice to go for another workout.

In fact, this watch has a Pulse Oximeter that measures the concentration of oxygen in your blood to understand how well your body is acclimatizing. Pretty advanced stuff here.

The Garmin Fenix 6 is a superior watch because of its sports and lifestyle features, but it is a bit lacklustre if you are buying a smartwatch in order to bring you greater convenience.

For most people, the Ticwatch S2 will fulfill their needs. If you want a jack of all trades, the S2 offers great value, great features and excellent convenience. It’s also very affordable, unlike the Garmin Fenix 6.